This weekend I went to this awesome new literary festival called Small Prestivus, books for the rest of us, a celebration of small presses. I had a BLAST! Fa-mazing writers, local food vendors, craft beers, and local music. The first day, all afternoon there were short readings on a stage ringed by the food vendors and author and press tables, then in the evening there was a featured reading with a group of writers punctuated by three musical performances. I love live music and two of these musical acts were the epitome of why I like to go to live shows.

The two acts I really dug were young (early 20s) upstarts. The one guy, James Neary – who has his first album for sale! which I got – was a very talented singer-song writer with a strong voice and solid guitar skills. The second act, Fragile Soul (yes, I know, yowza is that name terrible!), was a duo with two dudes, one on guitar, the other occasionally pulling out the harmonica. Harmonica dude did most of the singing, but they harmonized beautifully.

Video of James Neary (kid on the right)

And here is the cover to Fragile Soul's debut album, which you can download for free here.

One of the things that struck me while I sipped my small batch, craft IPA and swayed to Fragile Soul’s (oh, it hurts to type that name) haunting melody is that high school / early college me would have burst into tears of happiness. That evening is *exactly* what I longed for in high school and college, before working in the “real world,” then stumbling my way into a graduate program. The cool bar atmosphere, the earnest music, the level of supportive, celebratory comradery among the writers – and I was part of it. And the event was completely without pretension (other than the first singer. He was exuding a weird anti-intellectual pretension). Forget the fact that all performers there (other than the first singer) were REALLY good at their art, but thirty or forty people crowded into this space, whooped and hollered, clapped and made audible listening noises for almost four hours. It was a true community celebration. 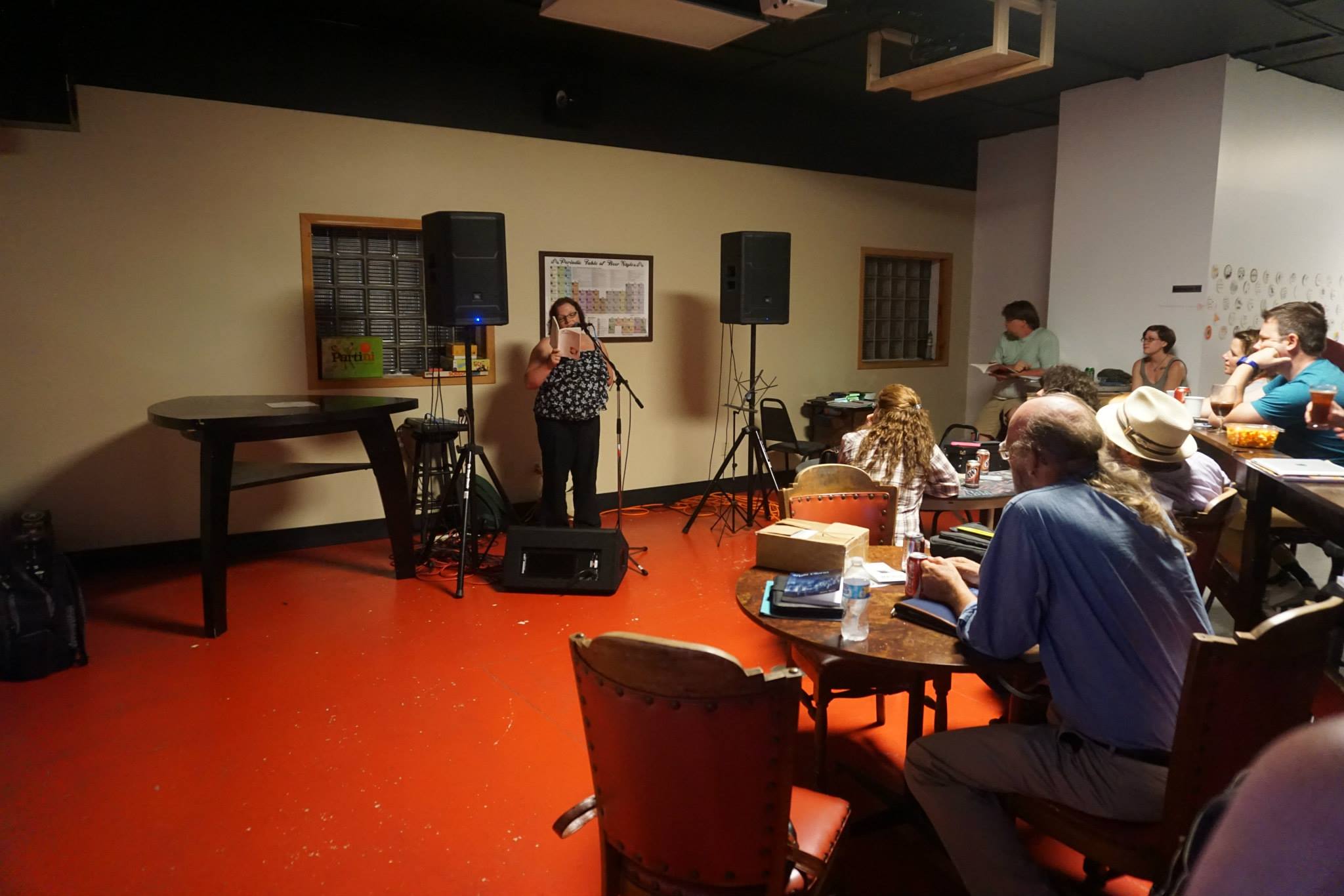 When I was thirteen to fifteen, I didn’t know things like this existed, but I knew I was longing for something. Sick longing. I mean, the kind of longing only sad, gothy macabre teenagers are capable of. Like I’d read Edgar Allen Poe poetry out loud to myself quietly on the front porch at 1 a.m. and cry because holy shit was it so beautiful. The words were resonant. The images crisp and pristine. The emotions raw. Even the sounds of the words on my tongue had a profound realness that escaped when the syllables evaporated, a fullness that in their absence left a louder silence. During the day while cleaning the mobile home, in the evening washing the dinner dishes, going to check on my mom or sister, I felt that rawness claw at my gut, but there were things to do; I tried to push it out of my mind. I had a friend who wanted to be a writer, friends who were avid readers, but never knew people got together to talk about and share their writing.

Of course one of my best friends, who wrote and called herself a writer, and I would listen to music on the floor of her mom’s mobile home or mine and dream about the worlds created in the songs. Sometimes we even read quietly together and maybe shared a passage of what we were reading. This is not the same though; it’s not like we talked about the words of the lyrics or stories or even really acknowledged the level of our appreciation for the work we consumed. And it’s not like I thought of myself as a writer. Writing was something I did for catharsis, something I didn’t tell anyone about or show anyone (well, I once showed my mom a poem I’d written in my little diary-sized notebook and her only comment was, “why did you write this as a paragraph and not like a poem.”). A few times in high school, poem writing was assigned for a class. The first poem I remember turning in, for my AP literature class, received a D. Yup. Mr. Dupertise said it was “actually pretty good,” but I didn’t follow the directions.

Once I was nearing the end of high school and into early college, I had found out about poetry readings and an art scene, but it still wasn’t something I felt part of. I’m assertive in a good number of ways, but not usually with things I’m afraid of being denied or rejected by (I’m terribly awkward and self-destructive when it comes to showing that I like someone). I don’t remember going to readings until I was assigned to go to one for my intro to poetry class in college (though I feel I must have been to at least one open mic at a Tower café, it seems impossible for that not to have happened).

The readings I went to broke my heart in the best possible way, but even though homework was an invitation that opened the door for me to go to all the readings I could attend around my work schedule, it seemed like everyone already knew each other, there was this pre-existing club and I was just a spectator. And still, I wasn’t a real writer. I was just some kid taking a class. Sometimes I’d leave the readings a little tipsy from free wine, a napkin full of cheese cubes and crackers from the serving tray shoved into my pocket for later, and sit on the curb outside the Fresno Art Museum and cry. I wanted so bad to be part of that community.

Though I think it’s based on questionable logic, I have always had this feeling that art wasn’t art and an artist wasn’t an artist, until they were part of a community. Partly I think this stems from the whole if-a-tree-falls-in-the-forest-does-it-make-a-sound argument regarding art – i.e. if something is created and it doesn’t affect anyone other than the person creating it, is it art. I personally find the “art is art, if you think it’s art” argument incredibly irritating. By that definition, literally EVERYTHING is art, because of course some dumbass who thinks they’re funny will say the empty McDonald’s fry container is po-mo.

I’m not saying we should have strict limitations on what can be considered art; I just think most things benefit from loose categorizations and identifying characteristics. Like, for me, personally, art has to engage somehow with the senses, has to elicit some kind of human emotion, and that emotion needs to actually affect other humans. Maybe this is my working-class background coming through (again), but the best art does something and it can’t do something until it meets community.

And that’s what happened over the weekend at Small Presitvus. It was fun as hell, definitely, but more than that, it fulfilled art’s highest accomplishment: impacting a community. I left there feeling totally connected to people I had only met 48 hours before and feel confident I will stay in touch with. And past the political/social issue, the festival helped me realize how lucky I am and how close I have come to fulfilling the dream life young me could barely admit to herself she wanted - to read, write, and talk about poetry and literature. For that I’m incredibly grateful to the hard-working, caring people who put countless hours into creating these spaces. In this case, specifically Julie Demoff-Larson, Michele McDannold, and the staff of Blotterature lit mag & Lit Fest Press.

For a brief and funny recap of the festival’s events, check out this blog post from Sundress Publications. And stay tuned, in the next couple weeks I’ll be posting introductions to some of the amazing authors I met.

Quote of the Moment

“Swearing was invented as a compromise between running away and fighting.”